Of course, "copyshak" was a working title.

I spent 5 glorious years at Staples. Originally as a "Business Machines" associate, then the "Easy Resident Tech" for a hot second (when EasyTech was "striking while the iron was lukewarm" re: Geek Squad), and then a Copy Center Associate, 'cause I knew machines. Of course, while the CPC (Copy and Print Center) was my main base of operations, I still did everything else. Front-end, business machines, business supplies, IA (for a brief blip), receiving, money counting, deposits, transfers... I even did a quick "help out another store" for two days straight, which was my first and only overtime thing I did.

But it was an interesting world, as is everything in retail. And I wanted to make a comic about it. So I had the four archetypes: The schemer, the everyman, the grump, and the optimist. Each one would be parts of me, and parts pulled-from-the-folks-I-worked with. It would've been a gag-a-day about the world in retail, and I thought it would speak to folks. But for whatever reason (mostly the whole "never continuing a thing ever" thing), I didn't do it.

But it wasn't always going to be office supply retail. I workshopped several other ideas with the same character designs/mentalities:

Of course, if you know me, you know those were all places I had worked before (except the sci-fi one), so, those are things that would've been mildly autobiographical as well.

Anyway, here's it, seeing the light of day. For a hot second. 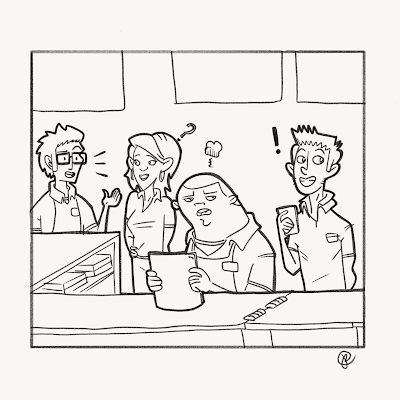 As before, here are the roughs behind the scenes: 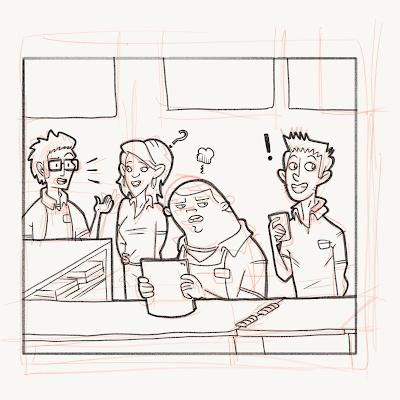