(Warning: Wall of Words) Meatfest has come and gone. Thank you for all the well-wishing! Shebra made this for my birthday and presented it to me yesterday. It's one of the most sentimental and heartfelt gifts that I've ever gotten. Not only was it heartfelt from her, but it's given from a ton of other people providing material for it. 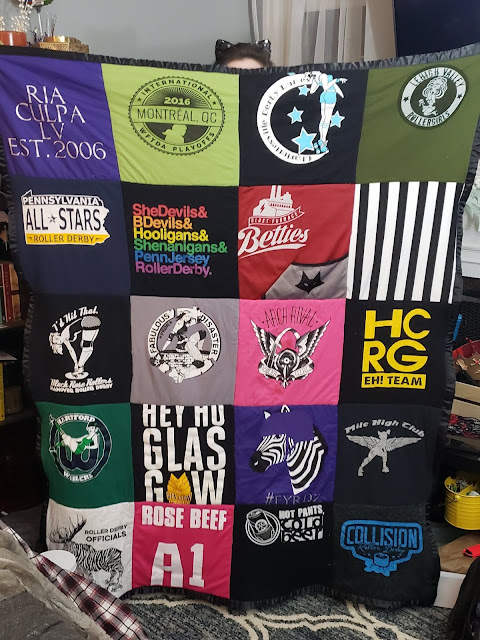 I wanted to explain the entirety of this quilt because it's ridiculously powerful as to some huge milestones of my derby career, and it's nuts to think of all the stuff I've done/gone through, etc. So I'm gonna. If I got who donated the things wrong, please let me know!


That so many people would provide such a loving tapestry of personal items and created squares that are so severely significant in my derby career is something that touched me to well up in tears. I didn't cry, but it was hard to choke back the positive emotional response to just a very-moist-ocular-situation.

Shebra had apparently been working in secret for this for 6 weeks and I had no idea, and the quilt is now one of my prized possessions.

Add to it a ton of meat dishes from various people, watching Cats, and just generally making a memorable time of it, and that's the recipe for an amazing event.

What a wonderful way to ring in my 36th birthday! Good people, good food, and a gift from a bunch of my favorites commemorating some of my favorite memories. I love you all and hope that you all can feel as loved as I did yesterday (and continue to feel, 'cause this is one comfy quilt)!